'We had a great first time with Le Ski, everything went so smoothly it was a delight! We certainly hope to use you again.'
B&SG, by email
Book online now 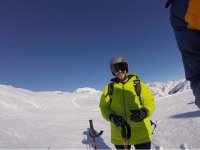 
After acquiring my role as Resort Support with Le Ski, I figured it would be a sensible idea to learn the basics on my local dry slopes. My number one aim was to ensure that I didn’t tumble around in front of all my new pals. I felt that the consequences would be being left to suffer on my own much like Kim from Chalet Girl. I had four, tedious, two hour lessons. Snow-ploughing from top to bottom, and repeating. After the final lesson I was given free reign over the 165m of dry slope to refine my new skills, I felt like I was grasping the knack, somewhat.

Following my arrival into Val d’Isere after my flight, I couldn’t help but feel intimidated by the sheer scale of the Alps, it was a complete visual overload for me. So much so, I fell asleep. After a fun week of training with LeSki it was finally time to pick up our ski equipment. I jotted myself down as an intermediate skier but was shortly corrected by the staff after I had explained I had NEVER touched real snow. Damn. 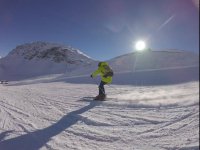 Since training was over, me and my new, tight-knit pals decided to celebrate at the local bars and had drunkenly arranged to meet early next morning to hit the slopes. With skis resting on shoulder and piste map clutched in hand, Matt, Jimbo and I flocked into the fancy Solaise bubble. At the top of the mountain I was presented with the most mind-blowing, panoramic views; how could one take this for granted!? Shortly followed by Maddie, Emily, Tara and Kitty we dropped our skis on the piste of Lac-parc, clipped in and set off. The feeling under my feet was indescribable, dry slopes have nothing on the real white stuff.

Keen to show off my skills I’d learnt, I pointed my skis directly down the mountain. Within a matter of seconds I had gained far, far too much speed for me to control. I pizza sliced as hard as I could to control this overwhelming speed but caught one ski and tumbled. My friends sympathised with me and told me ‘you did so great!’. There I was, un-phased by the fact I couldn’t stay upright for any longer than 30 seconds, flailing my arms around with joy and chasing my skis and poles down the mountain. Life could not have been a single bit better.

I had a two hour lesson, going up and down the Madeline run. Started barely being able to snowplough round a corner to being able to gather controllable speed and parallel turn. I was caught in so much wonderment by the gracefulness of skiing I refused to leave the mountain after my lesson. With little more than a handful of coco pops and a berrocca in the morning I kept chipping away, determined to get better. The silence of the mountain had captured my full attention and I yearned for more time, but I had to head back.