HOME
'Connor was exceptional. We count ourselves as being very lucky. Nothing was too much trouble. I wish my kitchen was as clean as his!'
Robert, Chalet Bois d'Emeraude, January 2018
Book online now 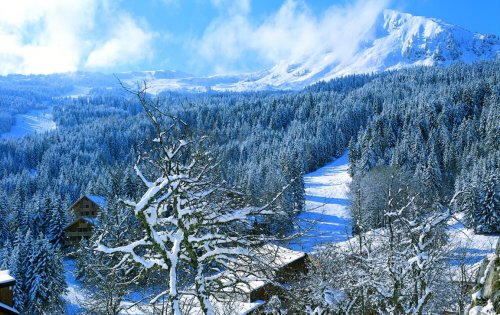 
'We keep returning as we love La Tania itself - the links to the vast Three Valley ski area, the quiet charm of the village, the tree lined runs and the family atmosphere'
- KC, by email

grown up to be an attractive and welcoming place since her inception in 1992 for the Winter Olympics. On the 80 minute journey from the airport into the village you’ll pass the perilous ski jumps in Le Praz before entering the woods in which the village of La Tania nestles.

There are pleasant chalets around the horseshoe shape making up the base of the slopes, as well as a selection of French and English bars and restaurants,  ski equipment shops and ski schools. This area is car-free, making it an easy place to wander with children after skiing.

You can view the live piste map by clicking here and selecting Ski Maps from the Live Information menu.

For beginners there’s a mini-drag for first ventures into skiing, moving up to long, winding greens and the undulating blue Folyères when they progress to the gondola.

For intermediates La Tania also offers a good selection of quieter runs and, within two lifts, access to the whole of the Courchevel valley.

For experts, there are long steep blacks leading down to Le Praz, and in the ‘Dou des Lanches’ sector, where there’s usually some untracked off-piste. The tree runs into Le Praz and La Tania are the best place in all the Three Valleys to spend your time in snowy weather.

The lift pass office have a selection of passes to suit differing levels of ability.

For real beginners, there is a free drag lift so that you can practice and not need to buy a pass until you're ready to go further afield. There are half day and timed passes also available for those who aren't up to a full day. Intermediate skiers can choose a Courchevel Valley pass which gives plenty of skiing. With this pass you can also 'upgrade' with a Three Valley extension for a day if you fancy heading into Méribel or beyond.

If you're a keen skier and want to go into the Three Valleys even once during your week, then it's worth opting for the Three Valleys pass which gives you access to the largest ski area on Earth! There are also family versions, pedestrian passes for non-skiers, discounts for children and seniors and freebies for the very young and err... 'extra-mature' skier!


Ask on the transfer bus if you're unsure as to what would be the best pass for you and your group.
Click here for prices.


For kids
There’s great access to the rest of the levels of Courchevel. Using the free buses, the opportunities to keep the children entertained could involve iceskating, shopping or bowling up in 1850, not forgetting good old bumboarding which you can do closer to home.

There’s often a firework display going on during peak weeks.

For adults
Despite its family-friendly status, adults aren’t ignored in La Tania. There’s a mixture of French and British-owned bars, often featuring live music during après-ski or later in the evening.

There are a number of restaurants varying in price and menus, ranging from take-away crepes or chips, via pizza and steak up to Michelin-starred fare.