'What a wonderful week, the weather was superb.The Chalet Kanjiroba was cosy and comfortable. The host Alice and James were amazing and couldn’t do enough for us. I would definitely recommend Le Ski.'
DG, Kanjiroba, January 2021
Book online now 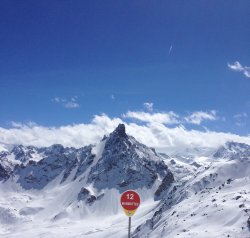 
The snow has really started to slush up this week! We have had white out on 2 days but relatively overcast most days apart from Wednesday. The temps have been increasing which has made for very sticky snow under skis. Saturday saw very high winds and cloudy.
Temperatures today: Lows of -5, highs of  10
Base of snow: 122cm
Summit: 215cm
Last snowfall: 6cm on 29th March
33/42 lifts currently open
52/76 trails open

It's definitely Spring skiing! The morning's are beautiful, with freshly groomed pistes being soft underfoot. I took the Pyramides drag lift up to the top of 1650 today and the snow was was in good condition. Inevitably after lunch, below 1800m does become fairly heavy but if you hug the peaks of Saulire, Crux Noir and Vizelle, you can still find great snow!

Temperatres today: Lows of 0, highs of 12

50/58 lifts currently open
97 out of 111 runs open.
The forecast for the week is currently giving a mixture of sunshine and showers with temperatures decreasing towards the end of the week hopefully bringing some fresh snow with it on Friday & Saturday.